Do frogs really breathe with their eyes?

You and I breathe using a big muscle in our bellies called the diaphragm. As the diaphragm contracts, it moves downwards, expanding our chest cavity and sucking fresh air into our lungs. 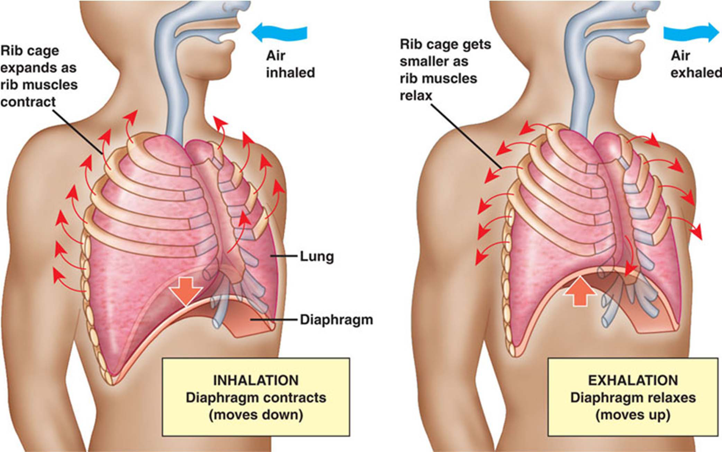 Breathing with a diaphragm in humans. Image source: innerorgans.com

But the diaphragm is actually pretty new, evolutionarily speaking. In fact, only mammals (like us), crocodilans, and turtles have a muscle like it. Birds, lizards, and snakes all use lots of tiny muscles to rotate their ribs and expand their chest cavities. And amphibians like frogs don’t expand their chests at all — instead, they use their mouths to do something called buccal pumping.

During buccal pumping, the floor of the mouth is lowered, expanding the buccal cavity and sucking into it both (1) fresh air from outside and (2) old air from the lungs. When the buccal floor is raised again, the fresh air moves down into the lungs, and the old air is pushed outside.

So, where do eyes come into this? Over the past century, some scientists have suggested that frogs might use movements of their eyes to help in breathing. This seems like a really strange idea … until you think about how frogs’ skulls are different from our own.

Frogs have big holes in the bony roofs of their mouths called interpterygoid vacuities. This means that only soft, squishy tissues separate their mouths from their eyes, so eye movements could easily affect the size and shape of the buccal cavity. (If you don’t mind pictures of dissected animals, check out this link for an image that shows this really well!)

Under this palatal buccal pump hypothesis, frogs breathe much like what we went through above — the difference is that movements of their eyes also help in expanding the mouth as they breathe in (by raising), and making it smaller as they breathe out (by lowering). 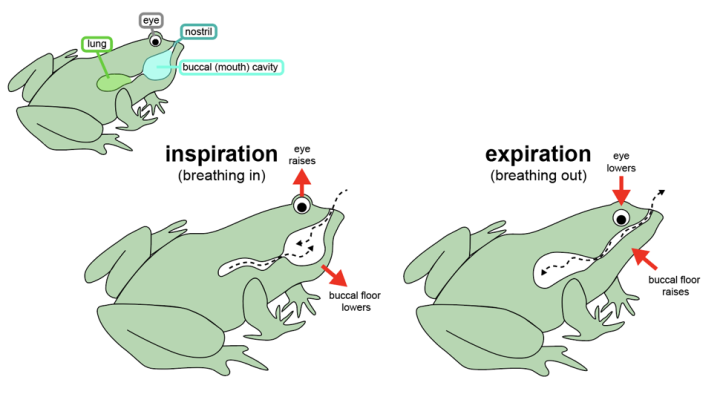 A new study released today in Integrative Organismal Biology by F. Witzmann from the Museum für Naturkunde in Berlin, Germany, and colleagues from Brown University and UMass Lowell, experimentally tests the palatal buccal pump hypothesis in frogs (and salamanders, whose skulls also have those big interpterygoid vacuities).

The team used a technique called X-Ray Reconstruction of Moving Morphology (XROMM) to visualize the movements of the eyes in bullfrogs and axolotl salamanders during both breathing and feeding. XROMM combines data from CT models of an animal’s bones and X-ray videos of its motion to accurately reconstruct how its body parts move in 3-D — giving researchers temporary X-ray vision.

Based on their XROMM analysis, Witzmann and colleagues found that frogs’ eyes move both closer together and downwards into their skulls when they walk around and when they swallow food. But the researchers also discovered that, contrary to the palatal buccal pump hypothesis, the eyes of frogs and salamanders don’t actually move during breathing! 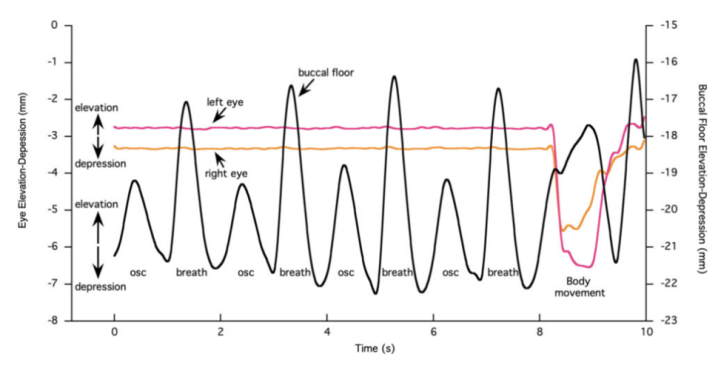 Back to the drawing board…

The results of this study have pretty huge implications for how we reconstruct the physiology of extinct amphibian-relatives called temnospondyls. Temnospondyls lived all over the world from around 330 to 120 million years ago, and came in a wide range of body forms. And — especially important for us — many of them had big interpterygoid vacuities in their skulls.

So if not for breathing, what were temnospondyls’ giant skull holes for? Some paleontologists thought that the vacuities might have reduced skull weight, but this hypothesis was tested and didn’t hold up. Others think that they helped better distribute the forces that the skull experienced during feeding, or that they might be related to changes in the sizes of feeding muscles — these hypotheses are currently well-supported. And thanks to their interpterygoid vacuities, temnospondyls could almost certainly use their eyes to help in swallowing prey, like the frogs in today’s study.

It just goes to show you that as our experimental methods for studying living animals improve, so can our interpretations of the fossil record and our understanding of how animal function has evolved! So make sure to keep checking out iobopen.wordpress.com for the latest in cool, organism-centered biology.

Armita R. Manafzadeh is a PhD candidate studying the evolution and development of joint mobility at Brown University. Her interests include functional morphology, vertebrate paleontology, and biomechanics.